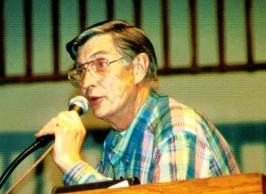 The Grand Master Fiddler Championship was the brainchild of Perry Felton Harris, M.D., D.D.S, F.A.C.S., Colonel U.S.A.F. and had its origins in the mid-1950’s when Dr. Harris was in school at the University of North Carolina at Chapel Hill.

One afternoon, Dr. Harris heard that Roy Acuff and his Smokey Mountain Boys were going to be playing nearby and he and some friends decided to go see them. Dr. Harris loved fiddle music! Dr. Harris found his way backstage, met a man by the name of Howard Wilson “Big Howdy” Forrester beginning a friendship that lasted for life. That friendship played a major role in the develpment of his idea decades later. Howdy played fiddle for Roy and did most of the bookings for Acuff-Rose. In addition to being a Smokey Mountain Boy, he was an executive at Acuff-Rose Music Publishing (Acuff-Rose Music Publishing was sold to Sony/ATV Music Publishing in 2003 and remains one of the most extensive classic song catalogues in music today).

After practicing Dentistry in Pinehurst, N.C. for two years, Dr. Harris decided to move to Nashville to study Otolaryngology at Vanderbilt University Medical School. While at Vanderbilt, he became Chief Resident and taught and practiced medicine at Vanderbilt and Baptist Hospital (now St. Thomas Midtown) for many years.

Dr. Harris’ friendship with Howdy allowed him to spend almost every Friday and Saturday evening at the Grand Ole Opry in Roy Acuff’s dressing room. There were always jam sessions going on with the best musicians dropping in between appearances on the Opry stage. The Harris family enjoyed many nights backstage at the Grand Ole Opry in the Ryman Auditorium, and later at Opryland where President Richard Nixon and Roy Acuff dedicated the new Opry House in March of 1972.

Over the years, Dr. Harris became known as the “Opry Doc” a nickname Roy Acuff gave that stuck. Dr. Harris
was both physician and friend to Country Music stars Roy Acuff, Porter Wagoner, Dolly Parton, Marty Robbins, Bill Monroe, the Osborne Brothers, Jim & Jesse & the Virginia Boys and many others that would lend their support to the Championship.

Another friendship developed when Dr. Harris met E.W. “Bud” Wendell. Bud was a very successful executive with National Life & Accident Insurance, the parent company of WSM and the Grand Ole Opry. Bud had taken over as the manager of the Opry and he rose through the ranks to become the CEO of National Life. Their friendship would be critical to the Grand Master Fiddler Championship’s beginning. Bud was the CEO of National Life in 1974 and his vision and drive helped save the Ryman Auditorium from being torn down by city leaders of the time. He deserves a lot of credit for saving the mother church of country music that is now known worldwide as the centerpiece of Nashville tourism and one of the top music venues in America.

From the 1960’s through 1971, Dr. Harris was persistent in his lobbying of Bud, Roy, and anyone else that would listen, for their support in his sincere belief that the Grand Ole Opry needed a fiddle contest. In 1971, Bud told Dr. Harris that WSM would provide support for the contest if he would organize it and supply the fiddlers! Dr. Harris gathered Howdy, Roy, Johnny Gimble and others together to come up with a list of those to be invited to compete in the first Grand Masters to be held in June 1972. The first contest was held in the parking lot of Opryland USA (now Opry Mills) under a tent – as the park was not quite ready for visitors. Vernon Solomon of Texas was crowned Champion and appeared with Roy on his live radio show that Saturday night. That began a tradition of the Champion playing the Saturday night Opry that continues today.

The Grand Master Fiddler Championship has always been blessed with the greatest contestants and entertainers and the first year was no exception. The entertainment in June 1972, consisted of Roy Acuff and the Smokey Mountain Boys, Porter Wagoner and Dolly Parton, Bill Monroe and his Bluegrass Boys, Jim and Jesse and the Virginia Boys, Marty Robbins, the Country Gentlemen, Lester Flatt & Mac Wiseman, and others, who performed in between the judging of the contestants while scores were tabulated. Roy and Porter never missed a contest and served as Master of Ceremonies each year along with help from Eddie Stubbs, Grant Turner, Kyle Cantrell, Keith Bilbrey and Hairl Hensley.

Two of the hardest workers over all the years were Charlie Bush and Pete “Bashful Brother Oswald” Kirby, who kept things running behind the scenes by rounding up the contestants (fiddle wranglers) and side musicians when it was their time to play. H.G. and Dorothy Roberts were always there to feed the entire group their famous Fiddlers BBQ, simply the best! H.G. Roberts is a Dr. Perry F. Harris Award recepient and was awarded perfect attendace in 2018 having nver missed a contest in 47 years.

Re-establishment of the contest had been under discussion since 1997. In March 2004, Howard Harris and Ed Carnes formed the Grand Master Fiddler Championship, Inc. as a Tennessee non-profit corporation. The Corporation applied for and was awarded United States Internal Revenue Service 501(c)(3) status as a charitable and  education corporation in July 2004. This status marks a major milestone in our progress and allows us to build on our  rich history and tradition. It will also allow us to seek and engage sponsorships that otherwise would have been excluded from the organization.

With support and advice from Bud Wendell, the Grand Master Fiddler Championship organizers held a series of meetings with Dan Hays, President of the International Bluegrass Music Association (IBMA), the trade organization
formed to support bluegrass music and musicians worldwide, to explore possible ways to work together. After approval by the Board of Directors of the Grand Master Fiddler Championship and the IBMA, the competition was re-established and held in conjunction with the IBMA “World of Bluegrass” annual event in Nashville, Tennessee in October 2005 and remained part of IMBA's annual convention through 2012.

In 2013, the Country Music Hall of Fame and Museum's management invited the Grand Master Fiddler Championship to hold our competitons in the Ford Theater. Fiddling is an important part of the country music story, and we're happy to welcome museum visitors in to hear and see that the tradition is alive and well. It is entirely fitting that we now hold the Grand Masters in a room-the museum's Ford Theater- named for old-time fiddle enthusiast Henry Ford and the Ford Motor Company he founded. Mr. Ford staged fiddle contests at his dealerships across the nation in the 1920s, and he would be proud of this link to him and to his legacy.

We are proud to be able to grow the Championship and know that through the hard work and dedication of many involved over the years we will be allowed to expand beyond our current scope of activities to include teaching, support teaching institutions, endowments at various universities, and many other activities that promote the fiddle and fiddle music.

The 2022 Grand Masters will return to the Country Music Hall of Fame and Museum's Ford Theater on September 3rd and 4th (Labor Day Weekend). Visit this website often for updates.