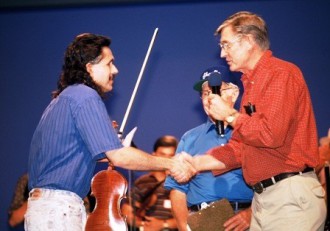 Dale Morris Jr. accepts his award from Charlie Bush and Dr. Perry Harris at the 1991 GMFC.

For detailed information about the contest please click on of the links above.

The Grand Master Fiddler Championship is a showcase for some of the best fiddle players in the world. Each year, the Contest Committee invites top Fiddle Players from around the world to compete in the contest.

A Preliminary round is held and open to any and all fiddle players regardless of age or nationality.   Pre-registration for this round becomes available in April each year. Anyone who pre-registers will have  the option to SKIP the draw for numbers and play LAST after those who registered on-site. After on-site pre-registration closes, no additional registrations will be accepted. Any exceptions or appeals must be made to the Contest Committee. The decision will be made based on the number of registered contestants and the time needed for the round.  A form to register is available online and can be printed or faxed to take advantage of pre-registration.

The Top 5 to Top 15 fiddle players are selected from this round to join the Finalist Round. In addition several additional players may be selected by the judging committee to compete as a finalist. After this round, 10 players are then chosen to compete in the Championship round. Making the Championship round guarantees a player's selection as an invited Finalist for the next year. Contestants from as far away as Japan and Australia have competed as finalists in past contest. In support of our educational goals, the Contest Committee occasionally selects additional players from this round to compete in the Finals round based on the number of Finalists.

There are five judges all of whom are Champion Fiddlers and experienced in competition judging.  Additionally, between rounds there will be entertainment by nationally and internationally recognized musicians and stars.

The newly named Grand Master Fiddler Open Champion will be offered a performance opportunity on the GMFC slot on the Grand Ole Opry (if slot is granted by the Opry) for the next year.

The Grand Master Traditional Fiddler Championship contest is a showcase event that is designed to recognize fiddlers who play a fiddling style outside the recognized US “contest” or “Texas” styles, or Canadian “contest” styles. If a fiddler plays thecompetitive style heard at places such as the U.S. Nationals at Weiser, Canadian Nationals at Shelbourne, or the Texas State Championship at Hallettsville then he or she should not enter this category. Contestants playing in those styles in this competition will be disqualified – if in doubt ask the contest coordinators before you enter this category.

The trophy for the Traditional Fiddler Championship is named after the late Hon. Senator Robert C. Byrd, a long-time fiddler and fiddling fan and an honorary member of the Grand Master Fiddler Championship Board of Directors. The category is co-sponsored by the West Virginia Department of Arts, Culture & History and  the Missouri State Old-Time Fiddlers Association.

The newly named Grand Master Fiddler Traditional Champion will be offered a performance opportunity on the GMFC slot on the Grand Ole Opry (if slot is granted by the Opry) for the next year.

The Grand Master Youth Fiddler Championship contest is open to any fiddler 15 years of age and under (as of contest day). This category is designed to give younger players an opportunity to compete against players in their own age range.

The newly named Grand Master Fiddler Youth Champion will be offered a performance opportunity on the GMFC slot on the Grand Ole Opry (if slot is granted by the Opry) for the next year.

Accompanists are the unsung heroes of the fiddling contest world and spend countless hours helping fiddlers perform to their best abilities. The Accompanist contest is open to guitar, bass, mandolin and piano backup players but no GMFC fiddle participants may enter this division, and vice versa. This contest showcases accompanists’ talents and provides recognition and cash prizes.

The 2022 Grand Masters will return to the Country Music Hall of Fame and Museum's Ford Theater on September 3rd and 4th (Labor Day Weekend). Visit this website often for updates.